I found a pill. This is the description: It is a white round pill, non coated, scored on the front with a # 512 on the back. What is this?

It's a percocet 5. I'm not familiar with it very much but do know that that the percocet 10 is blue. But the 512's are good anyways.

Mallinckrodt Pharmaceuticals lists this tablet as containing 5mgs of Oxycodone, and 325mgs of Acetaminophen. It is a generic for Percocet. (NDC 0406-0512) 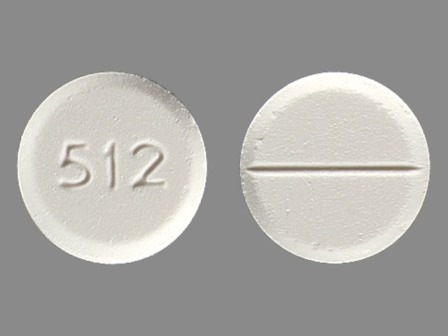 The FDA warns that it carries the risk of being habit forming, and may cause side effects, such as nausea, dizziness, headache, dry mouth, and constipation.

The Inactive ingredients may include:

Though they may vary, according to manufacturer.

Is there anything else I can help with?

White Round Pill Scored One Side with line, other side imprinted with SB4

I believe it may be a left over Dyhdrocodiene (df118) but just another generic. but I need to check ## Hi David, The clo...

2 REPLIES
White Round Pill Scored On One Side With J 245 on The other side.

I found a lot of these pills in an unmarked bottle in my daughter's pill bag. She is bipolar and takes a lot of meds...

1 REPLY
round white pill with 20 on one side, scored on the other

I found some white pills amongst other benzodiazepines in a drawer at a friends house and I'm having trouble disting...

white round pill with 477 on one side and scored on other side ## The white pill in description is Metoprolol tartrate (...

I found these in a med-set that comes from my pharmacy. I add my vitamin to the each appropriate daily row. These looked...

I found these in a med-set that comes from my pharmacy. I add my vitamin to the each appropriate daily row. These looked...

wondering what a small round white pill is? has N and under that 350 and is scored on the other side with no writing on ...