It was filled from a pharmacy in Tijuana and has no numbers anywhere but has the 3 scores on both sides. Seems to work for me but I want to make sure it's actual Alprazolam.

I have the same pills, I get my rx filled from Mexico as well. I doubt they're bad, they just might be generic? My other friend who has a prescription & gets them here in AZ had a different type. She let me compare hers to mine & they work the same in my opinion. Hers are 1 mg & mine are supposedly 2 mg. I always take half of mine because a whole one makes me super drowsy. Hope this helps :)

I think they're called Rafil, we see them a lot here in Laredo (it's a border town). They're still Alprazolam, just from out of the country.

It's just a generic version. You see them a lot from Mexico. Some may even argue that they're stronger than the American version. They are called Tafil in Mexico and do the same thing. By my knowledge the ones that tend to be counterfeited will literally say Xanax on the side. Usually those are in Houston Texas or more up north, but no worries, you got 2 mg alprazolam.

What I meant to say of my last post was the ones that usually get counterfeited are the ones that literally say Xanax on the side the blanks are the same thing just from a different country if it makes you feel better I just took a blank at 9 p.m. and was out on my couch by 11 p.m.

I got a white bar 3 scored with a 2 on the other side the word Xanax. Can you confirm it is legitimate?

Are they 2 mg? I just took my dose and feel good.

No company writes the word Xanax on their pills. Those are totally bad. I learned the hard way. 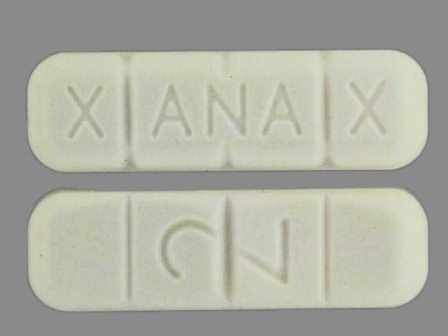 Not true. The ones with xanax on one side and 2 on the other are xanax not generic.

I recently got 2 tablets with no imprint, but I noticed most xanax should have an imprint on them. I'm just worried and don’t want to take something that's bad. Any advice? I took one and didntt really try to test it by taste so idk :(

Sorry guys I have to make this clear for everyone because deadly fentanyl laced pills being so prolific, unless your pills were prescribed by a reputable brick and mortar American pharmacy, they are almost surely bootleg. This doesn’t apply to any particular imprint, they have the pill press equipment to fake the imprints. There are some that are so outrageously bad that are crooked and cracked but many look genuine. Sometimes the print is different lettering and I hear you might sometimes see crystals on the bottle or the pills, but there’s no way of telling if they are legitimate unless it’s in the original prescription bottle from the U.S.A. And you are sure the person didn’t refill an old bottle with phony pills (a new prescription bottle for that is much more likely to be legitimate). I ended up taking what I thought was a Xanax and I tested positive for opiates (not good for me because I’m in methadone treatment). The big danger though is the fentanyl that is everywhere in these bad pills, not only highly addictive, like OXY, but it’s also HIGHLY DEADLY at the amount of a deadly overdose fitting on the tip of a lead pencil.

Please don’t mess around with these. Yes you could get a generic, or a legitimate pill, but benzodiazepine withdrawal is a nightmare and buying illegally not only puts your life at risk of a deadly overdose, if you are getting benzodiazepines, doctors these days are not cool with giving scripts even to those of us that have been taking it for a legitimate health issue. They are treating us all like addicts and will refuse to taper or taper so fast you can spend years withdrawing. I’m not some goody two shoes, I’ve just been through hell. Also if that’s not enough, even if it’s not deadly, your body is still withdrawing as this bad pill is putting you to sleep but you’ll still wake up with the dangerous withdrawal like high blood pressure.

This is not worth your life. This isn’t a moral judgement, just a fact.

Cutting through the warnings to the straight facts: most pills nowadays are bootleg, even in third world countries they fight these bootlegs in the actual pharmacies!

I agree, they are about half strength. Look like they came out of the cheapest presses they could find. Shame. I think all the Ifa Celtics meds are way underdosed. Thinking they're counterfeit under the guise of a company name. Shame

They could be a Mexican generic version. And the only other pill that's xanax and not counterfeit will have the number 2 on one side and say X ANA X

white xanax bar no imprint on back but 2 front

Please help me. Is there a 2 MG xanax bar with a 2 on one side and 3 scores on the back and front? I have seizures and t...

Is there a Xanax bar with no imprint whatsoever? It has 3 scores on it that would allow it to be broken up into 4 little...

4 REPLIES
white xanax bars with 4 sections without an imprint

I've had this problem for a while now. EVERYONE had this white xanax bars but they didn't have any imprint on th...

This pill is supposed to be a white xanax bar with the imprint code U94 on both sides any answers to what this is? ## Ye...

2 REPLIES
white round xanax no imprint

To the people in here that say "there is no way to confirm if the pills are in fact alprazolam "XANAX" witho...

I just picked up my monthly prescription of Xanax from my Pharmacy but I have never seen these before and they do not ta...

I have a white bar with 3 lines on each side but no imprints on it at all. I'm told they are from Mexico and are 2 m...

Looks like a xanex Is it possible to be real ## Hello, Dennis! How are you? All Xanax bars that are prescribed in the U....

I have a white bar shaped pill, that says canal mo.jm on one side and has 3 splits on the other side and the number 2. I...