Round white pill V on one side 2355 on other side, please ID. 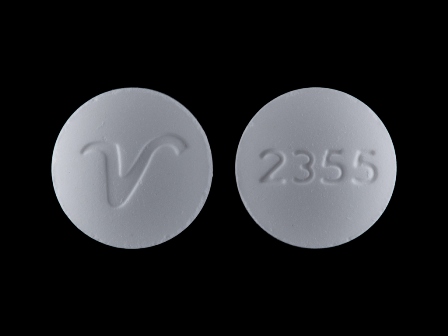 I would like to get the Fioricet generic Butalbital/Acetaminophen/caff tabs V2355 on line. I have used it for headaches and some pain for other areas. Can I get a prescription for a doctor on line, I have no primary. Thank you

I am being told it is fioricet (generic), but have only seen vicodan with the
V

Was told it was a narcotic n for pain a round white pill., with a script big V on one side n other the numbers are 2355 ...

round white pill with v inprinted on front and 2355 on back ## The pill being described is used for treating migraines. ...

How long past the expression date are the pills still good to take? ## The pill in description contains a combination of...

1 REPLY
round pill white on one side, green on other

White side has an imprint of a capital E ## This is an over the counter product, Extra Strength Excedrin, it contains Ac...

1 REPLY
White Round Pill one side 100 other nothing

2 REPLIES
white round pill one side ab other side mp

White round tablet with AlB on one side, A score B. On the other side MP. That's it. I've heard it is an ampheta...

Anyone know what this pill is I found it in my sons room? I need to know what it is I am worried that he may be doing dr...