Is this T 194 yellow pill a new Percocet? Is it regular release? My pharmacy switched from the A333 version.

An oblong/oval yellow pill marked with T 194 on one side and blank on the other is an immediate release 10/325mg Oxycodone HCL + Acetaminophen tablet (generic for Percocet, NDC 31722-0194). I don't know how new it is (I think it was approved some time around April 2017 per the NDC page), but the manufacturer is Camber Pharmaceuticals. 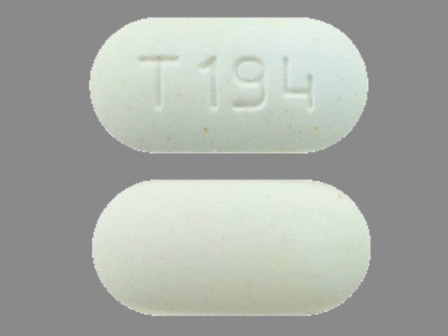 I hope this helps!

Thank you David. I appreciate the time and compassion it takes to reply and help others.

Ive been on Oxycodone 10/325 for 2 yrs. I've had my share of different types, its according to pharmacy and what they have in stock. I was given these T-194 3 months ago and out of all the different brands I've taken this is the strongest one. They say there isn't a diff between manufacturers and I will be the 1st to say they are nuts and must not have been on a continuous prescription.

They really work for me. I never had the yellow one's and would like to continue getting those kind which take care of the pain quickly.

I dont like the A333's Usually CVS gives those out. My small town local pharmacy usually gives me Endocets which are good. I got the T-194 from Walgreens. Im hoping this is the brand they continue giving out. Ive been on Oxy for 2yrs due to Kienbock Disease (wrist) and at times I would have to take 1 and half if pain got too bad. My body has become immune to the 10s and so I take the 1 and half every once in awhile. When I took the 1&half of the T194s I could tell a huge difference, so it must be quick release cause it hit me like a ton of bricks compared to anyother brand ive taken. Yes im speaking candidly, being honest is the only way you get the answers you seek. No, im not an addict that abuses my script. Hope this helped.

I understand. I know the frustration and feelings of defeat in dealing with this pain. I hope we all feel better soon. If it helps my pharmacy told me I can add one dose of between 6-800 mg Ibuprofen when I take Percocet. It has Tylenol in it so Ibuprofen just helps manage pain.

It is a generic percocet. I get the same thing when I got switched. You're good, no worries.

I agree that these are stronger than the A333. I'm finally feeling some relief from my pain and I hope my pharmacy keeps this brand.

I mean seriously!!!!ive haad extreme strenuous bck pain,my leg,abdominal area i mean its excruciating,so finally got my meds got it filled from pharmacy omg!!!!i ws shocked went ahead kept goin cuz i usually alo
Most evrytime i get the white )percs so i haad hurry take one least since i ws puttin up items i bought &ws in extreme pain so waaatA u know i wS HEALED!!!IN JESUS NAMEpls tho let me kno how yours workex remember i said ##YELLOW k THX??????????????

This is in fact acetaminophen 325 / Oxycodone 10 mg. Standard release. It's, for some reason not as fast acting as your A333's but still just as potent.

I would love to know what pharmacy will have.A333,thats what my pharmacy used to have

John you are absolutely correct!!!
All are not the same......


I'm on my 2nd month of these worthless pills and have felt worse than I have in a long time! I've no appetite. I'm nauseous, weak, anxious, and just feeling like crap! So no.. a few days or weeks isn't going to make this pill better.

Sadly, I really like my local walgreens. But I might have to get my oxy 10s elsewhere. I'd still go there for my long term if possible though.

There's another thread about these pills from Cambers that are full of complaints about the side affects. I wish Walgreens would go back to the A333.

Everyone. These are the Instant release Percocet 10mg. The reason people are experiencing weird side effects is probably because there not used to the Oxy hitting them that fast. Nothing wrong with them, just keep in mind they will seem stronger because the medicine is released faster.

Hi, my pain management switched me also at Walgreens from a333 to t194. I would rather have the a333 again, I took 6 a day. The t194 I take 8 a day for my chronic foot pain. The t194 are fine, you will maybe notice they are just a little weaker than a333. If you can, get your doctors approval for hydro 20s extended release. 2 in the morning and 2 at nite takes the fire out of my feet just rite. Your liver will appreciate it better also.

If you can find a pharmacy that will give you Endocets, those have the least bad side effects and are strong.

I dislike the new ones from Walgreens the T194 that all walgreens carry and the ONLY ones they carry. Shame because I like Walgreens

Really?! Hmm, Ive been on Oxycodone for 2yrs straight and ive taken many, many different brands.Ive found between the Endocets and the T194s to be the most effective. After 2 yrs ive become immune to the "Head Change" that comes with them, except the Endos & T194. I know diff people have diff results, but its suprising you get nothing out of em. I go to Walgreens now just to get them. Stay away from CVS they give the A333 and those are like having nothing at all.

yellow oval pill with G on one side and other 2611

I found n sons room...plz tell me what it.is... worried momma ## The only tablet I can find with this marking is listed ...

Found near my checked bag when I picked it off the conveyor belt in Bali. One pill only. No idea how it got there or wha...

3 REPLIES
oval yellow pill with 15 on one side

I have a yellow tablet with 15 on one side and nothing on the other. Can somebody tell me what it is? ## Based on the de...

yellowish oval pill with the number 1 enbeded on one side and nothing on the other. It is not a gel or capsual ## Hello,...

1 REPLY
yellow oval pill with s 901 on one side

oval yellow pill with S901 on one side ## Located a match it's Alprazolam 0.5 mg, which is also known under the trad...

2 REPLIES
yellowish oval pill with 15 on one side

Found this pill under my couch oval yellowish pill with 15 on one side what is it ## Hello, Nick! How are you? This tabl...

Small oval yellow pill. Number 650 on one side. Letters OM on the other side. ## This is Ultracet (containing Acetaminop...

it's supposed to be zyprexa. is it? can't find it on the web. concerned pharmacy gave me wrong pills ## Hello, D...

mobic ## Yes, this is a 15mg Mobic tablet, which contains the active ingredient Meloxicam, this is a nonsteroidal anti-i...

I found a small oval shaped pill with a break line on one side there is a 1 and an 8 on the other side of the break line...