I have a white round pill with GPI A325. Is it a 5mg oxycodone pill used for the treatment of pain?

No, it is not Oxycodone. This tablet is manufactured by Amneal Pharmaceuticals (among others), and they list it as containing 325mgs of Acetaminophen. It is a pain killer available over the counter and is a generic (store brand) for Tylenol. (NDC 65162-350) 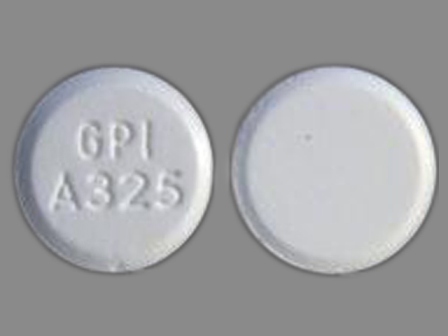 The FDA lists its typical side effects as possibly including nausea, dizziness, and headache.

Is there anything else I can help with?

Gpi 5 Long n blank on other side.. it's a RX correct...how do I explain to doctor this will help me w severe pain as I don't want morphine...this is RX...need more info to explain to them this is what I'm willing to take for I just had surgery n don't want the heavy sedation drugs

I think you are talking about an oblong white tablet with the marking GPI A5 on one side and blank on the other, right? (NDC 0904-1983) 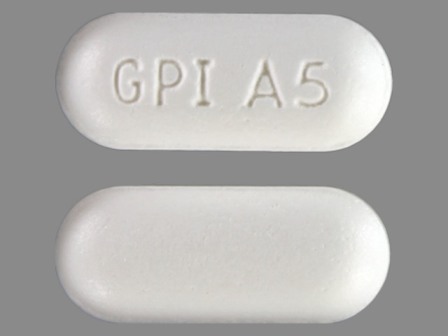 This is actually an over the counter drug (non RX) which also contains Acetaminophen, but in a 500 mg dose.

To be honest, if this tablet is good enough for treating your pain, you can just as easily pick up some Extra Strength Tylenol or generic equivalent from the store since it's basically the same thing. Hope that you're doing well!

Oxycodone? White round pill with FL 10 in it

2 REPLIES
white round pill with 223 and a score line - Oxycodone 5 mg?

My pills are round, white, with 223 on one side and a line on the other. Does this contain aspirin? Can I take it with a...

2 REPLIES
ROUND WHITE PILL WITH GPI A325

What is a round white pill imprinted with GPI A325? ## Hello, I have identified the pill you described as an over the co...

Is this mixed with either vicoden or percocet? ## It is Acetaminophen 325 mg.. It does Not contain any other medication....

So I told my friend I had really bad cramps and she gave me like 6 of these and now I'm throwing up blood. What shou...

Small white round pill one side has M with a square around it and the other side has a score in the middle with the numb...

The pill must have gotten wet so I'm not able to see it clearly. But what I do see is on one side it has a square bo...