Round white tablets EP over 906 on one side, and the other side is the number 2. It is labeled as Lorazepam. 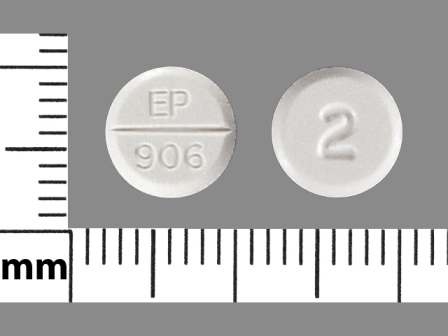 Lorazepam has relatively potent anxiolytic effects and its best known indication is the short-term management of severe chronic anxiety.

Whats the strengh difference alprazolam 0.25. And lorazapam 2 mg.? Is one more strong or are they the same?

I have a tablet with ep 906 on one side and 2 on the other. It is supposed to be Alprazolam but has a sweet taste to it. Can someone confirm? I've never had one taste like that.

This is the only pill I can take without any side effects .I have tried all other meds similar to this particular pill a...

1 REPLY
White Sleeping Pill With X On It

A friend gave me this small white, round sleeping pill with an X and two lines on the top and bottom of the X. I was tol...

2 REPLIES
white round pill with ep904. What is this?

Need to know what this pill is. Small white round pill with ep904 on it. ## Excellium Pharmaceuticals lists this tablet ...

Could this be kolodpin 2 mg a benzo small white line across middle ep on top can't make out bottom# ## Hello, Bernic...

Found a round pill, white with speckles - red or purple speckles - X on the opposite side of the EP-D 225. Please help m...

1 REPLY
Round white pill with EP stamped on it

I found some white round pills with E|P stamped on one side and need to identify them. ## Did you ever find out what thi...

white round pill with 300 a separation line and a rounded triangle as the imprint nothing on the other side ## Hi hafuc,...