What is a round white pill marked Watson 3369?

This tablet contains 325mgs of Acetaminophen, 50mgs Butalbital and 40mgs of Caffeine. This is a generic for Fioricet, commonly used to treat migraine and tension headaches. (NDC 0591-3369) 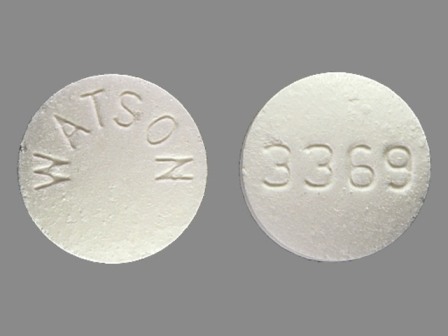 Some of the most common side effects include: dizziness, drowsiness, nausea and abdominal pain.

Is the pill watson 3369 like a pain killer? Does it give the same effect as vicodin?

Why does the pill have watson imprinted on the back?

The Watson imprint on the tablet only represents the name of the particular pharmaceutical manufacturer. Without a drug ID code, the name itself means very little.

Sameoldbs is right. Now i know i take fioricet. It is a form of narcotic, however it won't make you feel euphoric like norco unless its fioricet with codeine, which then you have a very powerful narcotic and very addicting; more so than norco. But the name watson is just the brand. Every pill has a name brand and a generic. Be careful with the fioricet. Too many rapidly reduces your heart rate cause it's intended to slow the blood to your brain, which is what causes the migraine.

No, this drug does not contain any narcotic (opioid) ingredients. While it relieves pain associated with migraines, it works differently than Vicodin, Norco, etc.

This is suboxone without the subutex, idk what people are talking about this isnt hydrocodone!! I should know my husband...

Is the white pill watson 461 a pain pill containing hydrocodone 10mg? I wanna know why it says watson on it? ## No, this...

1 REPLY
White Round Pill Watson And 932 On Side

White Round Pill Watson And 932 On Side need to find out what kind of meds this is. ## This tablet contains 10mgs of Oxy...

1 REPLY
Round White Pill Watson 932 On One Side

Round white pill with Watson 932 one side and IP466 on the other side ## These are two different imprints from 2 differe...

Mom gave me pills that she claims are a narcotic and that's why they're not in the container because she threw i...

1 REPLY
white round pill watson on it

Round white pill, Watson on one side, 3256 on other side. Please ID. ## This tablet contains 5mgs of Cyclobenzaprine,a m...

What is a round white pill with the imprint of Watson 932? ## Based on the description provided, I found the pill to be ...

What is a round white pill with Watson 338 printed on it? Is it a narcotic? ## Based on the description provided, I foun...

white round pill watson 339 ## Based on the description provided, I found your pill to be Diclofenac sodium (75 mg). Dic...