need to know name of pill and side affects

White round pilss with West-Ward 290 are Methocarbomal which is a muscle relaxant. They come in 400 and 500 MG pills and are used for muscle aches, arthritis, joint pain. They will make you sleep, you should take with a full glass of water of some food. My dosage is 2 pills before bedtime to help relax and sleep. I have a herniated disc in my back and neck and take these along with pain medication. They do take some time to build up in your system so don't take them one day and expect them to work immediately, take them and continue taking them and after a few days they start to work. If you conitinue to take them they seem to work better after a continued use. I am not a doctor so don't use this as a guideline, always consult your doctor before taking any medications.

2 type O's in my reply, PILLS and take with water OR food.

LOL! No need to worry about the typos.

Anyway, just wanted to add some specifics, this particular tablet is the 500mg dosage, a generic for Robaxin.

Some of the most common side effects include: drowsiness and dry mouth.

I'm allergic to aspirin and it says it has some aspirin in it as well as percocet and soma has aspirin but doesn't bother me. My question is would it be likely for me to have a allergic reaction??

i take xanax 2mg for anxiety attacks and 1 mg at night before bed. can i take the two together but at seperate times? Do they have bad interactions together?

Is a 290 westward a narcotic or will it show in drug panel? I'm out of my pills and need relief for my back. What is it? It has a split on one side and is an oval pill. 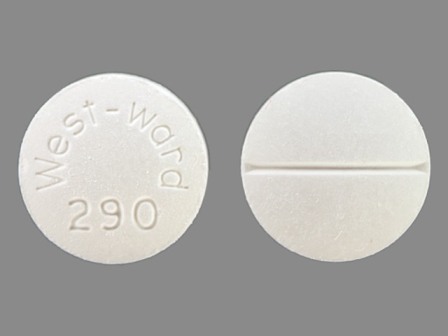 Just trying to verify whether this is my belladonna type of pill or another. I'm away from home for a few days and p...

White oblong pill with West ward 292 on it. What is it? ## Based on the description provided, I found your pill to be Me...

1 REPLY
west-ward white oval pill with 252 on it

white oval pill w/ west ward on it along with the number 252 at bottom of pill. it's a caplet ## white oval shape pi...

8 REPLIES
Blue round pill with westward 787 on it

Long oblong white pill with west-ward 292 on one side and blank on the other side. ## This tablet contains 750mgs of Met...

Hi, I am trying to figure out if this is the prescription pill I am looking for. I accidentally mixed some bottles up in...