I found a pill and not quite sure what it is. I think it may be an antibiotic, but could be a form of Vicodin. It is oblong and white, but it is bigger and says GG N7. If anyone knows, please share with me. Thanks.

I AM NOT SURE WHAT THIS PILL IS USED FOR, THE LABEL GOT WET AND I CAN'T READ IT?
IT IN WHITE SMALL CAPLET AND HAS AN I-2 ON IT

white pill oblongw rounded corners
E145 on on side

i found 4 pills in my boyfriends jacket that are white with the letters DAN on the front and 5658 on the back...what are they?

I was clearing out my med. cabinet and came across some loose cream-colored caplets that say G650 on them...are these Vicodin? I was prescribed Vicodin after my c-section. Please advise.

I found some old bills and I know it a pain reliever possibly a vicodin It is white oval with M366 on one side. Can you please tell me what it is?

So is the white pill with DAn DAn on it a Vicodin? I found one also????

round white pill with the GG 190 on them

This is Amoxicillin/Clavulanic Acid 875mgs, a generic for the antibiotic Augmentin.

I2 is a generic or store brand of Advil, Ibuprofen 200mgs.

This is Nabumetone 500mgs, a generic for the nonsteroidal anti-inflammatory Relafen.

This is Cyclobenzaprine 10mgs, a generic for the muscle relaxant Flexeril.

This is Acetaminophen 325mgs and Hydrocodone 7.5mgs, a generic for Anexsia or Vicodin.

This is Methocarbamol 500mgs, a generic for the muscle relaxant Robaxin.

This is Baclofen 10mgs, a generic for the muscle relaxant Kemstro.

Did you mean UCB 910? This is a generic for Lortab. It contains Acetaminophen 500mgs and Hydrocodone 10mgs. 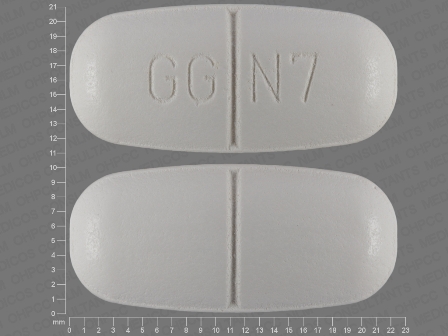 tiny round white waton one one side and 241 over1 i think,also large ovalpill w/ PD157 on one side and 40 on the other,also tiny blue pill w/ a 4 on one side and 6 letters way to tiny to read coulod start w/ an A,V or I it has six sides

V 4211 is Methocarbamol 500mgs, a generic for the muscle relaxant Robaxin.

93 089 is Sulfamethoxazole 800mgs and Trimethoprim 160mgs DS tablets. This is a generic for Septra and also sold under several other brand names and generics. It is a combination of two antibiotics, it is used to treat severe infections such as those that might occur in the urinary tract or intestines.

This is Guaifenesin 800mgs, Pseudophedrine 80mgs, this is an over the counter cold remedy, used to help treat cough and congestion.

Was this helpful? 0
Sort Thread by Most Recent

I found a few pills in my husbands medicine cabinet, it is round, white with 512 on one side and a break mark on the oth...

This is a round blue pill, bisected on one saide and with C34 on the opposite side. No additional markings except edges ...

Another pill that I'm trying to ID is a bright orange capsule/caplet shaped pill. The only markings on it are N500 o...

This pill is an orange/peach color and is round in shape. It has the P with a circle behind it engraved in one side, whi...

This pill is small, round and orange. The imprints on one side say PMS 10 and it's scored in half between the PMS an...

Hi I need help identifying a small white pill with the marking WELLCOME on one half of the semicircle, and P2A on the ot...

4 REPLIES
pill identification small peach pill, round APO on one side, BI over 5 on the other side

oblong white watson 325 one side line through middle reverse side ## I found a pill in my sons room n don't know wha...