I've found two posts similar to this tablet that was found in my bottle of Levetiracetam (epilepsy medication). It looks nothing like my pills and I have no idea what it is. It's a tablet that's flat and oblong shaped, light blue-green, says MRK on one side and 951 on the other. Can anyone please identify this tablet?

The only tablet I can find with this marking is egg shaped, it s manufactured by Merck and is a 25mg Cozaar tablet. It contains the active ingredient Losartan, which is most commonly used to treat high blood pressure, and certain cardiac conditions. There is also a white, oval tablet with just the 951 on it. NDC: 00006-0951 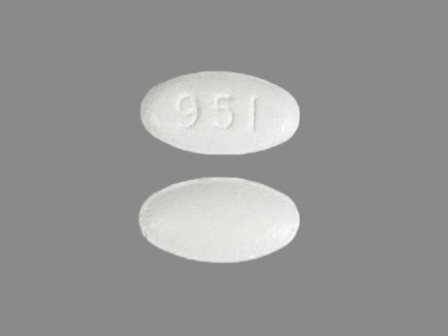 Its typical side effects may include nausea, dizziness, hypotension, increased urination, and headache.

Have you checked with your pharmacy?

oblong tablet. white with blue specks on the entire length of one side, pink on the other

4 REPLIES
oblong blue tablet with 133 on it

I found a blue oblong tablet with the number 133 on one side and the letter v on the other side. what is it? ## From wha...

drug name for oblong white tablet w-1715 ## Based on the description provided I found the pill to be a Potassium Chlorid...

I have an oblong blue tablet with initials CP on back. I have no idea what this is. Can anyone identify it? ## Not sure ...

Can this be a Vicodin or generic, or Percocet or generic? It is an oblong white tablet with Ax5307. It came back when I ...