I also found a round pill that is smooth, round but not flat and has L194 on one side... The other side is blank. I remember taking them I thought for pain but i threw away the bottle.. I don't believe It's for heartburn... Help

20mgs of Famotidine is exactly what these tablets are, I have a bottle right here, because I take them every day for GERD and gastritis. These are a generic for Pepcid. 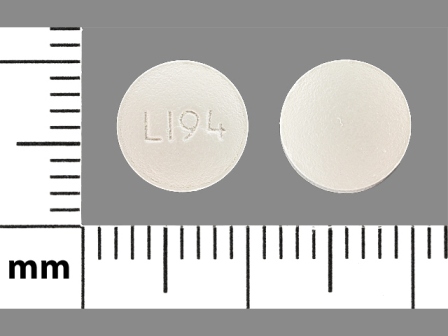 If you don't "believe" that's what they are then you shouldn't post a response here. You should post based on facts.

L194 is also tramadol which is for pain. It's name brand is ultra I have a whole bottle of prescribed medication without logo

l194 is not tramadol. tramadol requires a prescription. it is not for pain as we know it unless you have heartburn. consult your pharmacist.

This could also be Tramadol. A non opioid analgesic that binds to the opiod receptors helping w/ pain. I believe they're (The DEA) is going to up it's status to a scheduled narcotic this year. I am currently prescribed these and it's a white round non scored pill (pea sized but not that round) one side is blank the other side has L194 engraved in it.

It is Tramadol....you consult your pharmacist because I do have a script for it. I also have my generic otc heartburn pills that have the same engraving except it's scored and the other side isn't blank A pharm's # 727-327-8801 its a Walgreens

L194 is also tramadol. The other L194 medication is used for heartburn and has the same engraving. You can tell the difference between the two if you look at the blank side of the pill. Tramadol has a blank side and no score on it. The Famotidine has a blank side with a score in the middle. However there have been some manufacturers that do not score the Famotidine, so be careful. Thanks.

L194 is absolutely without a doubt not tramadol, this is the only place you will find someone claiming that it is

L194 is famotidine 20mg. I have a bottle of kroger brand "heartburn prevention" famotidine tablets 20mg with imprint L194 on one side, nothing on the other. small, white, & round.

I searched pill identifers on the Internet for L194. the only results were famotidine. the people claiming they are tramadol are wrong. they either are mistaken or someone ripped them off

This is completely incorrect and should not have been posted as firm knowledge before being CONFIRMED!!

Actually the word you are looking for is ultram

Oh yeah and by the way .....it's neither ultram or tramadol...which is the same damn thing anyway it's famotadine...I take it everyday. So don't be worried.

This is correct..sitting in front of a small bottle NOW!

Tramadol is called Ultram...not Ultra...n this pill isn't Tramadol. I have the exact same pills n my grandfather is a retired pharmacist that still work now n then n he gave me these for my Acid Reflux disease...

Ikr...ppl need to get their facts straight before talking about things...

I miss my pawpaw... But yea. It's def for heartburn. I have found a few in the bottom of a junk drawer in desperate need of de-junking. (*´`*)

Well, I am so glad I got this figured out -ha ha
it is either famotadine or however you spell it...or Taramadol.

Which one is it you guys?

i know avaibiity of duexis(Ibuprofen+famotidine) worldwide, its manufactured by horizon pharma USA. ## I'm sorry, I ...

small white pill with 955 on it ## Could you please provide any other markings from the tablet? There are many, many pil...

round, light yellow C120 tablet ## what beneficial c120 and why the people take it? ## Major Pharmaceuticals lists this ...

Does this pill help anyone produce a bowel movement? I swear I have to go within 30 minutes of every time I take this pi...

I have been on famotidine 20 years and just found out that some of my ailment I am having now can be a side affect of ta...

I have been on famotidine for about 6 weeks and the one side effect ringing in the ears are horrible. The ringing is so ...

How long are Famotidine tablets good for?...

white rounds ## The pill in description is Famotidine (20 mg); which is used for heartburn relief. To view information a...

I have a white pill of Tramadol with no scoring,and L194 on one side. Does anyone know what strength it is? ## Hello, Ki...