It's no good. I have to take three at a time for 1 hour of pain relief. Anybody else have this problem with M367 - 10/325? Has anyone else noticed that meds from certain manufacturers do not work as well for them?

I'm sure there are others that have had similar problems, there can be some slight fluctuations from one generic medication to another, so not all of them work well for everyone that tries them.

For example, I can take this same tablet and it really hits me very hard, after taking just one, I have good pain relief and am pretty much tired and groggy for most of the day.

You may want to try asking your pharmacy to order a different one in for you that's made by a different company. Do you remember who manufactured the one that worked well for you? 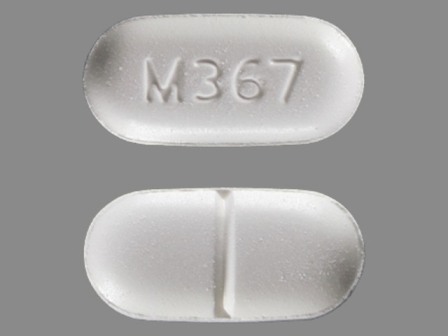 I recently got switched dr upped my dose to 7.5s
And guess what it seems like the generic crap they gave me isnt working plus it's making my stomach sick . Its not reliving my pain . It's the orange kind from qualitest i think . The lower dose was the same brand but not orange . It was white w red speckles and seemed to work . I don't understand . And before they gave me this generic crap they actually gave me the name brand new Vicodin that worked great ! But there is no generic out there for that so my insurance made me switch to these generic norco . I'm upset anyone got any advice ?

The M367 is crap. I'll bet you get it from CVS. They have switched to the cheapest generics on the market.

I'm located in Tomball, TX. I go to Gloyers Pharmacy. Go to Wallgreens or were ever but ask them first what brand they have before you let them fill the prescription.

I just got in a car accident and was perscribed norco 10/325 and without asking me the CVS pharm switched to m367 whites. They seem to be working great.

What I've noticed are the expiration dates. I have Norco m367, and expire in 2016. So far so good. I noticed this when I started using a hospital related pharmacy, the pain pills always expire in a year or less. But, I know there can b just crappy generics, I have 2 mg xanax. I usually get yellow bars, once my pharm gave me a white bar n did not work. I called my pharmacist gave them the ndc # for yellow, n no prob since. Ask before u get them the exp date, should b at least 2 years. Good luck.

I have been taking 10/325 mg. hydrocodone from Qualitest for over two years. A few weeks ago my pharmacy changed to Mallicrodt and I immediately got sick. It was as if I was on 5 mgs and I was going through withdrawal effects. I had the shakes, digestive problems, panic and I thought I was having a physical and mental melt-down. After reading some other responses throughout the Internet I realized it might be the medication. I called my pain management doctor and they said I could see him a week early. I also called the pharmacy who finally admitted they had been having other complaints. I am now going on brand name Norco. This is outrageous, but I know most people won't believe me. I am just lucky my husband could witness this so my doctor will understand I am not making this up.

I agree that the different "batches" of pain relievers (Vicodin), even if they are from the SAME manufacturer, can vary greatly in strength and the pain relief they deliver. I recently had my prescription filled for Vicodin by INTERPHARM and this current batch is much weaker than the last ones I received. I always have two "spares" on hand and I took just ONE from a previous batch and it is more effective than TWO from the new batch. This SUCKS when you have chronic pain and limited pills to take (just two a day). I guess that NO ONE in the Food and Drug administration in the U.S. is monitoring this or that they even give damn about it!

ok so i have a question on the M367 pills. First, I have taken Vicodin about two times in the past. First time i broke my left ankle 3 years ago and got a prescription for the 5mg/(not sure on the acetaminophen) Vicodin at qty 20 pills. Then one year ago I had two wisdom teeth pulled and got a prescription for 5mg Vicodin like 15 pills. I say that to point out the fact that i dont think i have any built up tolerance.. I dont take any regular medicine, then or now.When i took the Vicodin, both times, the pain was gone in 20-30 minutes and i was full of energy ( one pill a day) .. SO to my question... now i have a herniated disc pushing on a nerve root and some stenosis clamping down on a different nerve root.. all verified through MRI.... I got to the pain management Doc and he gives me Norco 10/325 M367 and im like hmmm these will send me through the roof,,, so i took a half a pill..... then 2 hrs later took the other half,,,, hmm nothing..... 2 hrs later took a whole pill..... pain finally went down from about an 8 to a 3.... so it did work but WHY do i have to take soo many????AND it lasted about 2 hours.... so i plan on telling the doc to give me something stronger OR ( after researching) should i try another brand??? I did find a pharmacy that has the Qualitest in stock OR should i get the Name Brand Pills????

Because the M367 in made by Mallinckrodt. Since the new laws went into effect October 6, all I have been able to find is Mallinckrodt and Actavis 10-325s.

Actavis norcos suck. Mallinckrodt is actually better, and it doesn't do much. People with real pain problems are going to be suffering something awful now, since any 10-325 norcos that work are no longer available.

Same here, sick and no pain relief. Will they never have the yellow 10/325s anymore?

i had the same problems with the xanax, vicoden in general majes me itch n wired. i now take percocet, less synthetic ingredients than vicoden, vicoden is completely synthetic.

They do make a difference.. Drug Emporium has Watson's but they change and but from what ever manufacturer has them in stock or mag be price. They vary from $44 to $68 monthly

Yes I totally agree the M367 are not effective at all. My pharmacy switched to them from the yellow ones about 3 months ago. I noticed the difference the first day. Was pretty much told it would be that or nothing if I started asking questions at the pharmacy. I don't think they care about the pain you're enduring or why. We all get lumped into one group, they treat us like we are all dishonest and just trying to feel high. A lot of people have no quality of life without help with pain relief.

Has anyone filled a Norco prescription at Sam's Club Pharmacy?

Walmart has yellow norco. By me anyway. Illinois suburbs

I received my med from a new cheaper pharmacy and wanted to know if I got ripped off I was prescribed norco 10/325 and g...

These are the first ones ever I have seen from Pars Pharmacy and they are the lowest quality I have ever had to use. I h...

ip ## Can you please post back with some more specific imprints? Are there any other numbers in addition to the IP? Norc...

ok so i have a question on the M367 pills. First, I have taken Vicodin about two times in the past. First time i broke m...