What is an oval blue with the letters GG 258 on one side?

The blue tablet with the letters GG followed by the numbers 258 is a 1mg Alprazolam tablet, which is a generic for Xanax, a Benzodiazepine that's commonly used to treat anxiety and nervous disorders. (NDC 0781-1079) 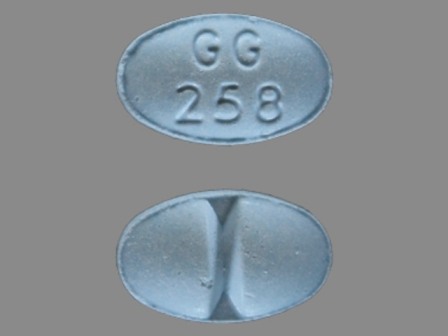 Where did you find it?

GG 258 is an oval blue pill is a generic form of alprozolam made by Sandoz. Target has it. Be sure to ask for Sandoz, because Target also sells the Dava brand, which as far as I can tell is a placebo. Dava is GARBAGE!!!

I have plenty of Dava Bars, including the neat Dava Green Bars. They are fine and you are insane. If you really want a pharmacy to know you're a druggie, start naming names of companies in an attempt to impress the Pharmacist on your vast knowledge of pills.

EDDY you are spot on! 'Druggies' are the only patients who discuss various manufacturers of controlled substance medications with their pharmacists!

OVAL BLUE PILL WITH GG258 ON ONE SIDE ## Xanax 1mg ## Jackie is correct. This tablet is manufactured by Sandoz Pharmaceu...

OVAL BLUE PILL ONE SIDE GG258 ## Based on the description provided, I found your pill to be Alprazolam (1 mg); also know...

How does one withdraw from xanax? ## Slowly, carefully, and with Doctors supervision. A treatment center is also an opti...

It is definitely Alprazolam (Xanax) 1mg Tablet.. ## Hello, Jason! How are you? I believe the marking you're referrin...

A small oval blue pill split in the middle on one side and a gg 256 on the other side ## I located a matchto a white, ov...

Levothyroxine. I use to take a purple bill(75MCG) and was sent a blue pill 75MG. I call the pharamacy and was told is wa...