What is a white tablet marked on 1 side and nothing on the other side?

Hello, Ronald! How are you?

What is the marking on it?

I can't find a listing for anything with just these numbers on it. Can you please post back and clarify? Thank you!

I agree that it is possibly Metoprolol. However, the official marking contains a logo with a score line and then the number 833 instead of 8333 as far as I can see. (NDC 62037-833) 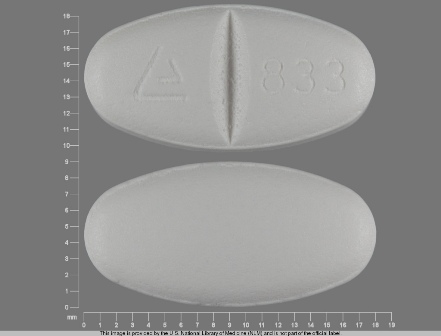 Another possibility is a white tablet with the marking A333 (where the letter A could be misconstrued as the number 8). This tablet does not have a score line on it, and contains Oxycodone and Acetaminophen 10/325. (NDC 0228-2983, now discontinued).

Which tablet do you have? Does it have a score line?

large white tablet with imprint of ANALVON ## i purchased what to be adderall and got some pills hard white pills with t...

I need to identify a tablet that is about 5/8 round, white with NL4 imprinted on one side ## Are there any other marking...

7 REPLIES
white tablet with 610 and v with

round white pill/tablet with 610 on one side and a large V on the other with a lower case d in the middle of the V. tab ...

white tablet marked c separated by line and da ## i found this tablets and i want to find out something about the tablet...

5 REPLIES
white tablet with WL369 on it

small and oblong ## I am having a difficult time locating this pill, is there any other markings on it? I located a pill...

Is a white tablet with an M on one side and number 970 on the other a generic tablet for Fioricet? ## The pill in descri...