What is name of pill and its usage?

What is this? I found it

I found a white round pill with 54 over 543 on one side and a line on the other. Can anyone tell me what this pill is?

This is a Roxicet tablet from Roxane Laboratories. It contains 5mgs of Oxycodone and 325mgs of Acetaminophen, it's a narcotic analgesic. (NDC 0054-4650 among others). 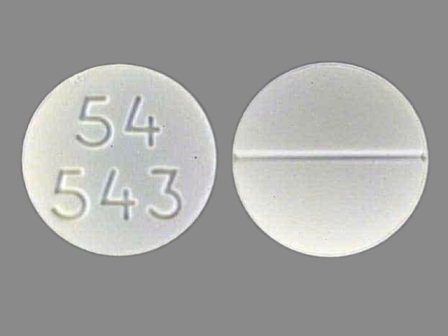 It has the potential to be habit forming and it may cause side effects, such as nausea, dizziness, drowsiness, constipation and dry mouth.

How long does it take for these to start relieving pain?

My dog is old and she ate three roxicet. She weighs around 8 lbs will she be ok?

44 543 on one side and smooth on the other side ## I can tell you that this is an over the counter tablet, manufactured ...

Is a round white pill with a line in the middle and 54 543, is it Percocet? I've been taking Percocet for chronic pa...

Should alcoholics be allowed to take this? ## This tablet contains 5mgs of Oxycodone and 325mgs of Acetaminophen and the...

I have a round white pill with a break point in the center. On the other side there are these numbers 54-543. Is this a ...

I found a little white round pill and on one side it has the numbers 543 and on the other side it has an 8 with a slash ...